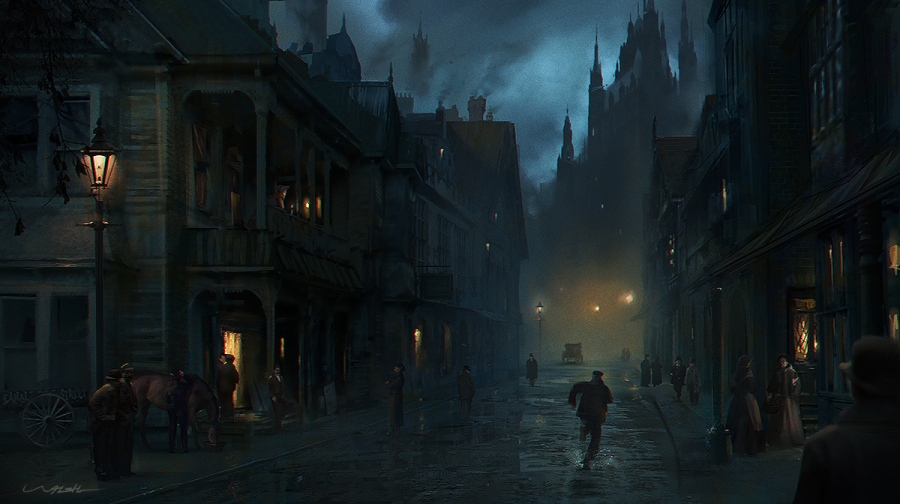 Tabletop games are really fun, and the current DnD campaign that I’m playing with my friends is getting pretty intense! My DM is awesome and he puts up with all of my nonsense, which I really appreciate lol! His DM from a different campaign is coming to visit NYC, so we thought it would be fun to do a one-off session of a different game with my DM’s DM (Grand DM? lol) to switch things up. The game we’ve chosen is Blades in the Dark.

Blades in the Dark is a tabletop role-playing game about a crew of daring scoundrels seeking their fortunes on the haunted streets of an industrial-fantasy city. There are heists, chases, occult mysteries, dangerous bargains, bloody skirmishes, and, above all, riches to be had — if you’re bold enough to seize them.

You and your fledgling crew must thrive amidst the threats of rival gangs, powerful noble families, vengeful ghosts, the Bluecoats of the city watch, and the siren song of your scoundrel’s own vices. Will you rise to power in the criminal underworld? What are you willing to do to get to the top?

Gangs? Scoundrels? Vices? Sign me up! In true nerd fashion, we spent this past week planning out our characters and coming up with back stories. Introducing my character for BitD… Lapis de la Nuit! (pronounced La-peez de la Noo-eet) 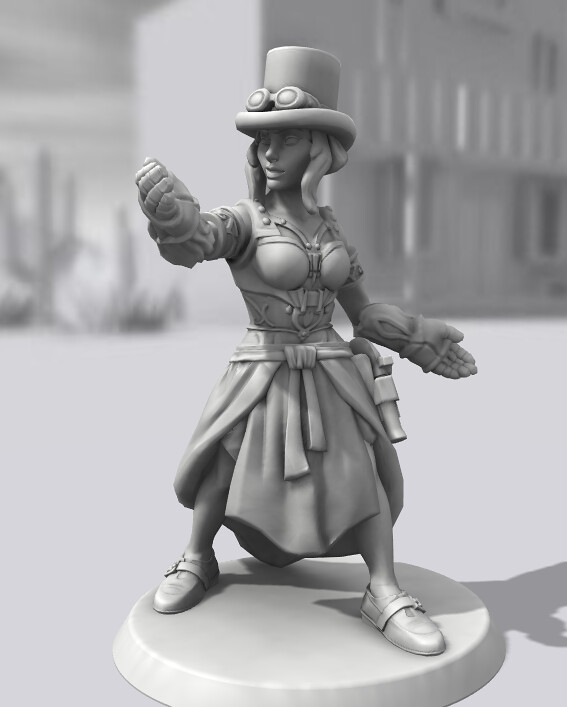 Lapis de la Nuit was born at the South Point of Akoros, a french-speaking peninsula (calling the location “Point-Sud”) and well known as a tourist attraction. The beautiful sunsets – and even more beautiful nude beaches – brought lustful men with stuffed pockets to the Point-Sud each summer.

Well before she was born, Lapis’ mother Celeste took advantage of this unique opportunity to capitalize on the vices of rich men. She opened a beach-side brothel near the most popular “plage nu” and hired a team of women eager to make some money. Times were very difficult for women in Akoros, but a common way to gain financial independence was for a young woman to sell her body to the highest bidder of the night. Celeste was a beautiful and strong woman, willing to do what it takes to provide food and shelter for herself and her family. After she gave birth to Lapis, she vowed that her child would not have to endure the hardships of life working in the Underworld at a brothel. As a single mother, Celeste wanted Lapis to have an education.

Unfortunately, formal education was hard to come by in this tourist town, which focused much more on sex, gambling, drugs and alcohol. But Celeste knew all sorts of  different people through her network, and she set up an arrangement for Lapis to study under an occultist named “Sébastien le Voisin” (or, Sebastian the Seer). Sébastien, a client of Celeste, was known for his ability to communicate with the dead. He taught Lapis how to read tarot cards, unleash the power of gemstones, and how to speak directly with “fantômes” (ghosts).

As a young girl growing up in a brothel, fantômes were really the only friends that Lapis had. Sadly, the first fantômes that Lapis met were spirits of former prostitutes who  died or were murdered in the brothel, or at other nearby establishments. The fantômes were kind to young Lapis, but they did lament their tales and Lapis was terrified that she might suffer the same fate as these women. Lapis spent most nights staring up at the stars and talking to fantômes. This gave her the nickname Nightstar.

Once she reached sixteen, Lapis was as beautiful as Celeste, and men began asking to pay for her company for the night. Lapis realized that she would need to leave town so that she might avoid a life of prostitution. She agonized over leaving her mother behind, but Celeste urged Lapis to follow her instincts.

As luck would have it, that summer, big-time Black Swords gang leader Bazso Baz was staying at Point-Sud to spend some gold that he had recently ‘acquired.’ Lapis happened to overhear Baz complaining that he could not get any sleep due to an enraged fantôme in his hotel room. Lapis was eager to use her Ghost Voice ability to help this man; she thought perhaps she could make a living as a Seer. Introducing herself as Nightstar, Lapis offered to visit Baz’s hotel and speak with this fantôme and tell it to leave him alone.

Lapis bravely went with the burly gang leader to his hotel room, only to find one of the ladies from her mother’s brothel, Nyryx, lying naked on the bed.

“What is this little bitch doing here?” Nyryx demanded at Baz, not even looking Lapis in the eye when they entered the room.

“Shut up, Nyryx. Nightstar is here to help stop the hauntings so I can get some fucking sleep,” Baz snapped at his courtesan.

Ignoring the two of them, Lapis used her ability to speak to the fantôme and ask the spirit to please calm itself and to move to a different room. Lapis had already established a good reputation for herself among the spirits of Point-Sud, and the fantôme obliged to Lapis’ request. Moments later, the room felt lighter and the spirit’s aura was no longer present.

Baz was amazed and overjoyed, having little knowledge of the occult or Lapis’ unique skillset. Immediately he started formulating ways that these skills could help the Black Swords gang.

“One of the biggest problems we have is when our men are killed before delivering intel,” Baz explained. “And you are so young and beautiful… we could use a young woman like you to lure our enemies into traps. What do you say? Will you travel back north with me? I can train you to be a Slider, a spy. You and your fantômes can find out the information we need for a heist. And you’ll be handsomely rewarded.” He flipped a large gold coin out of his pocket and into Lapis’ hands.

“How much money did you just pay her??” shrieked Nyryx. “She barely did anything! You didn’t pay me half that much for the time I’ve spent with you!” Nyryx was glaring at Lapis with a jealous rage.

“Nightstar has a valuable skill,” Baz replied, smiling at Lapis. Then he turned to face the bed. “And do not question me again. I’m going to venture out alone tonight. You can leave now, Nyryx,” he said coldly to the naked woman, who quickly gathered her clothes and rushed out the door. Nyryx kept her eyes directly on Lapis as she left, and they seemed to almost glow red with rage.

Baz told Lapis that he was leaving for a job in two days, and would like her to accompany him for espionage training. He asked what ties she still had here in town, and if travel was acceptable to her.

“Oui, I am ready to leave Point-Sud. My mother runs the brothel and I do NOT want to work there like her,” Lapis replied, more to herself than to Baz.

“That is fine news!” Baz was rubbing his hands together, feeling quite satisfied. “But I must ask you something, and I need you to think on it and answer honestly. Clearly you are not a woman of the night, and I respect you as a professional consultant. However, if I am to train you in espionage, I need to know how far you are willing to go. You are pretty and young, and you can use that to your advantage in many situations as a Slider. But sometimes to get the information, you will have to get into bed.”

Lapis sighed. The beauty that her mother passed down to her seemed to inevitably force her down this path. Such is the life in the Underworld. But being a Slider was something interesting – something MORE than just bedding a different patron each night. This was an opportunity to use her innate ‘gifts’ for something beyond a cheap thrill. She could unlock mysteries and secrets! And she could make a LOT of gold! With enough money, she could retire and buy a home for herself and her mother.

“Not with me, of course. I will train you and be your mentor. I’ll have some of the other female Sliders in the gang teach you about ‘bed manners’, shall we say. We will stop over at the Black Swords hideout near Cloudspire, and you can show them what you can do! I’m excited. Are you excited?”

“Excited to start my new life? Of course! Bien sûr!”

Before they left Point-Sud, Lapis told her mother about the plan to leave with Baz. Celeste was chuckling and gesturing towards Nyryx, who was drowning her sorrows at the bar in the entrance of the brothel.

“Seems as though someone else thought she’d be joining Bazso Baz on that trip,” Celeste laughed.

Lapis then produced the gold coin that Baz had paid her for helping with the fantôme, and gave it to Celeste.

“I plan on earning a lot more than this when I’m with the Black Swords. I’m going to make enough money so that neither of us have to work another day,” Lapis declared.

“Ah, ma petite fille. I will wait for you here until that day comes.”

They embraced for the last time in who-knows-how-long. Lapis was afraid to leave, but knew this was what she needed to do.

She left with Baz and they traveled north to Cloudspire, to the secret hideout of the Black Swords. For three years she learned to master the techniques of espionage, and found that using her body to gain information was far easier than she anticipated. Lapis, going by the name Nightstar, encountered different types of fantômes in Cloudspire, and she seemed to be growing popular within the spirit world due to her fair approach and treatment of the spirits. Sébastien le Voisin would be proud!

I won’t write any more because we still have to figure out how our characters met and what we are doing right before the game starts. We’ll be playing the one-off this week, so stay tuned for what happens when Lapis de la Nuit meets up with Gwack Zextra and Alecia Petrovona! If you are interested in Blades in the Dark, be sure to check out their website: https://bladesinthedark.com/

One thought on “Blades in the Dark: Introducing Lapis de la Nuit”