We planned a simple trip to Los Angeles, CA. Our plan was to visit the E3 expo and do some sightseeing. What I hadn’t planned on was Los Angeles BEING TAKEN OVER BY DINOSAURS. I should have known. The marketing was everywhere: The dinos have left the park. They just didn’t mention that the dinos went to LA.

My first dinosaur sighting was in Downtown LA. We were at the convention center, innocently perusing the aisles of the show floor at E3.

Raptor!!! It was behind a fence. I can’t be sure if the fence was electrified, but it did look damaged. People were lining up for an experience nearby so it must have been safe… maybe the raptor was tranquilized…? Paralyzed? lol

The following day, walking down past the Walt Disney Concert Hall… another tranq’ed dino was found, in a cage. It seemed like it was baking in the hot sun! (Is this inhumane??)

We decided to inspect the situation further, by waiting on a ridiculous line for what was called the Jurassic World Fan Fest event. We were told there would be VR games, giveaways, and free movie tickets maybe??

After the long wait, we made it to the entrance. And what did we find? FREE T-SHIRTS!!! YASSS! So that was a good start. Once we made it inside the giant JW doors…

A friendly T-Rex was waiting just inside the entrance!! Yikes! Luckily it must have been trained to only do photo-ops instead of eating people, so there was no carnage. And he was super IG-friendly, of course. I mean, this is LA after all.

It was hot af that day. I’m pretty sure I got sunburned at this event. Some dinos were lounging in a more shaded photo-op area. The dino above was just laying there looking pretty spent. I tried to take a selfie with another dino that was popping out of the vegetation. (Blue?)

We wanted to check out the VR game thing but the line was insanely long and they were having technical difficulties even getting it started up. So no. We also got raffle tickets that were supposedly eligible for a free movie screening but the booth to trade in the tickets wasn’t set up yet either. What kind of half-assed event was this? Dinos are baking in the sun in questionable conditions, humans baking in the sun on line for the event, and then some of the attractions weren’t even doable?

At least I got that free t-shirt!

Later in the day, we went to Santa Monica Pier. There weren’t any dinosaurs. Plenty of old people, if you count them.

Ugh. I loved Santa Monica. Next time I go to LA I might just stay in this part of town. The boardwalk is really fun. I bought a conch shell for my niece to hear the ocean. There were rides and we ate delicious tacos and drank various margaritas. We even saw some fancy plane thing that I barely got a photo of, but apparently it’s a cool rare thing! (Carney, help me out here in the comments please! lol)

We also saw a police van with surfboards rigged up on top, tourists struggling with selfie-sticks, a cute baby, and the Bubba Gump Shrimp mascot. Important things!!

The next day, we spent a majority of our time in Hollywood. I won’t clog up my blog with all of the celebrity homes that I took photos of, but you can peruse the full album on my Flickr page. Here’s a nice panorama I took from the Hollywood Hills:

We took a bus tour to see the sights of Hollywood, which was a lot of fun. In addition to the Hollywood sign and the celebrity homes, we were driven through Beverly Hills and around Rodeo Drive.

After our tour we stayed in Hollywood to hang out. We checked out the Walk of Fame and other popular sites, but we wanted some more authentic experiences. And alcohol. So we stopped at a couple of bars in Hollywood!

On the big screen they had some old black and white movie that we couldn’t name. The menu consisted of movie titles that described the flavor and theme of the cocktail. It’s kind of dark but I took a picture to give you an idea. (I was drinking Clueless!)

OK, so there were no dinosaurs here, but we were enjoying some delicious alcohol in some very old bars! (Well, old by California standards, anyway.)

At this point, you may be thinking that I had exaggerated about the dinosaurs. I DIDN’T. We encountered many more dinosaurs the next day – at Universal Studios Hollywood!!

We stopped at the Wizarding World of Harry Potter first. There was a scary dragon on the Harry Potter 4D Experience ride, but that’s not exactly a dinosaur. I get it. But don’t forget… Universal also has a Jurassic Park.

Sadly, I didn’t take any photos of the dinosaurs that I saw within Jurassic Park – The Ride. It was a water ride (not a log flume by definition, as we were in yellow raft style vehicles) that took us through Jurassic Park. But then we realize that the dinosaurs had broken out of the park! They were roaming through the ride area! We got sprayed and splashed as we went through, but nobody on our raft was prepared for the big drop. Tensions rose as we climbed to the highest part of the ride, readying ourselves for the final, sharp angle drop and then… A GIANT T-REX HEAD DESCENDS DOWN ON YOU. Adding just that extra amount of terror and adrenaline as you begin to drop straight down into the water below! AHHHH!! And then as you land the entire raft is hit by a giant WAVE of water and literally everyone comes out drenched. There’s no ‘oh if I sit on the edge I’ll be dry.’ Nope. Everyone. Gets. Drenched. And then they direct you into the gift shop, stocked full with clean, dry, brand new Jurassic World t-shirts celebrating the new movie. I see right through your marketing tactics, Universal!!

Then we saw Blue.

Unlike all the other dinos we had seen, Blue was not in a cage. Blue was not behind a fence. Blue was not tranquilized. Blue was THERE. Being FIERCE. People lined up to take photos with Blue, but the danger was reallll!!

Blue was very realistic. She moved and blinked and roared and screeched. She chopped her teeth at the young babies being offered for ‘photo ops’ (aka lunch?!?!) and scared the bejeezus out of some little boy that was watching on the sidelines. He almost cried. That’s how real Blue was. It was no joke. I should have taken a video instead of photos. Oh well!

I bet you won’t ever see as many dinosaurs in Los Angeles as I did!! Anyway, if you enjoyed the pics from my trip, there’s many, many more on my Flickr Album. Check it out below! Hit the side arrows to move to the next photo. Let me know what you like! 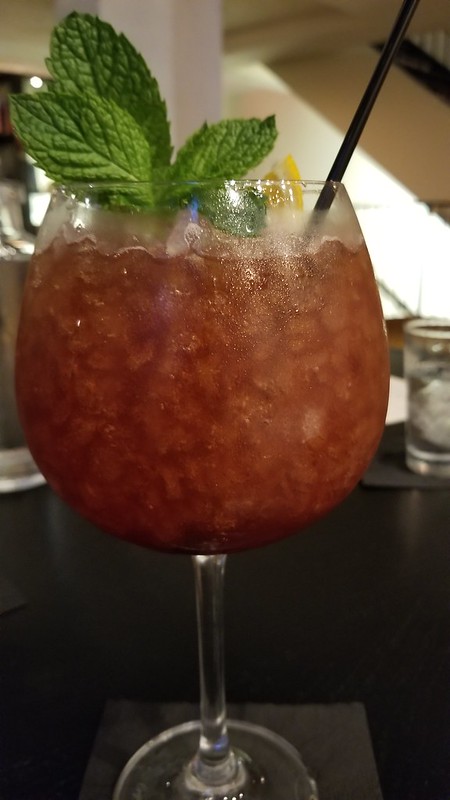