Yesterday was a super great day, because the Wii U was finally released!  Every Nintendo fan who had enough money and was lucky enough to snag a preorder went out in droves to pick up their shiny new consoles.  And I was no different!

As soon as preorders became available (in October I think it was?), JDubz and I went into GameStop to try and stake our claims on the newest toy.  However, they apparently had filled up on their preorder quotas and turned us away.  So we went to Best Buy, where they happily accepted our $5 deposits and promised to have our consoles on the day of launch.  So we were happy but worried, as we’d heard that Best Buy had a reputation of accepting more preorders than the number of products they actually receive in store.  While we had our preorders all set up, JDubz was concerned that we might not get our consoles.

Which means that he convinced me that we needed to get over to Best Buy at 7AM (when the store actually opens at 10AM) to make sure there wasn’t too much of a line.  We dragged ourselves out of bed super early on Sunday and made our way to Best Buy.  When we got there at that ungodly hour (can you tell I’m not a morning person?) we saw just ONE guy waiting in front of the store.  I would have been happy to go back home and come back closer to 9:30 but JDubz was very concerned and didn’t want to risk missing out on the Wii U.  So we stopped over at Dunkin Donuts and got breakfast, which we ate in his car at the Best Buy parking lot.  After we ate, ONE whole other person had joined onto the line.  We still figured we were okay so we played a bit of Pokemon until 8:30AM or so.  Then we headed over to the line to make our presence known.

As we joined the line, an older guy queued up behind us.  Then a cop car pulled over in front of the line, asking what we were all doing there.  We explained about the Wii U and the cop seemed very interested.  I’m still convinced that the cop was really just scoping out the line to see if he could get a Wii U for his kid lol!  After chatting it up a little bit, and hearing that one of the guys in the line said he DIDN’T have a preorder, (and that he’d asked a customer service rep if they expected to have enough consoles after fulfilling all the preorders and they said they should have plenty) we decided it was safe to go back to the car and chill for another hour.

By 9:30AM the line really was starting to get long, so we hustled back over.  The older guy who had been in line behind us originally insisted that we rejoin the line at our original position, which was nice of him.  So we stood there a half hour and FINALLY got into the store!  We rushed over to be the first in line at the customer service desk.  Of course we got our Wii U’s with no issue.  I really think we could have showed up AT 10AM and gotten the console, but some people are major worriers!  (And I thought I was the crazy one!  lol jk jk)

Whatever, all that matters is that I got this:

Like everyone else, I was surprised at how long the system updates took to download.  I’m sure it’s got a lot to do with servers being overloaded with too many eager gamers.  This shouldn’t be a surprise to any of my AC:CF readers, since we all experienced server errors when WIFI became available and everyone wanted to log on at the same time.  I’m sure that the server traffic will subside in a few days.  I wonder if that’s why they released the Wii U in America first, since they knew we were going to crash the servers on day one like we had in the past.  Might as well only have the server overloaded with one country’s gamers, b/c in AC:CF we were also competing with Japanese players for server space.  So I’m sure the Miiverse will be running normally by this weekend.

Speaking of this weekend – I am happy to announce that my StreetPass Long Island group is having our first Meet Up/Tournament on Saturday and Sunday!  The first day will be chock-full of Super Smash Bros. Brawl battling.  We are doing a singles and a doubles tournament, using the ruleset for the upcoming APEX 2013 Tournament in New Jersey.  There is also going to be a Project M tournament.  (I’m ashamed to admit I’ve never heard of or played Project M before but everyone seems to like it so I guess it’s cool?)  Then on Sunday we are going to host two Pokemon tournaments.  The first Pokemon tourney is going to be a classic doubles tournament with the APEX 2012 ruleset.  But after that, we are doing a “SPLI Pokemon Singles” tournament with our own rules.  I’m going to be giving away a Pokemon Black and White 2 Prize Pack to the winner (they are going to receive all the cool, exclusive stuff that was given out at the B&W2 Launch Event at Comic Con last month!).  We’re very excited to host this event.  I’m just hopeful that we get a decent turnout on both days.

I know it’s short notice but if any of my readers out there want to join us, please let me know!  I am pretty sure some of you are in the NY area, so please come out and help support my group!  Here’s the flyer for the event (made by ME!) just so you can see how awesome the event is going to be: 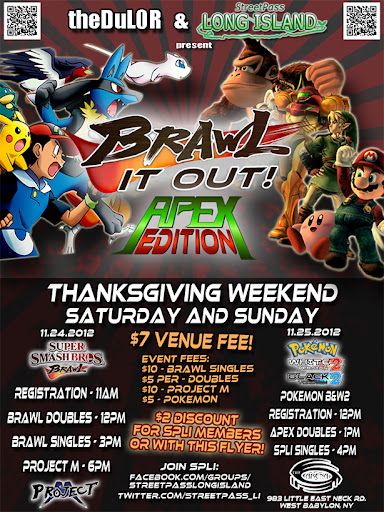 Of course, even if you can’t make the event, you are all welcome to join my StreetPass group – I don’t care if you live on Long Island or not!  I just want to get as many members as I can who are active Nintendo fans who aren’t trolls lol!  So please also visit our new website, which has links to all of our social network outlets.

If you have an ID, please comment below so we can add each other!  Thanks!  🙂

I’ve only gotten to play Nintendo Land so far.  I’ll do my best to post some game reviews asap.  Stay tuned!

One thought on “WII U MANIA!!”