Can you sense it? The change in the air? The sun shines down more warmly these days. At least, that’s what Mayor Gluxie has been saying about her campsite in Animal Crossing: Pocket Camp!

The super sweet Candy Cluster Muster event in AC:PC is winding down. It was a lot of fun, and I always love chocolate and candy themed furniture items! So what if I feel like I need to run an extra few miles at the gym afterwards?

Mayor Gluxie has an adorable bakery set up in the AC:PC Cabin area, and all of the event items were really cute. I especially enjoyed the Valentine’s Jam Session part, which was the gyroid collecting. Finding all of the gyroids unlocked new and jazzy musical instruments for the campsite’s main stage! 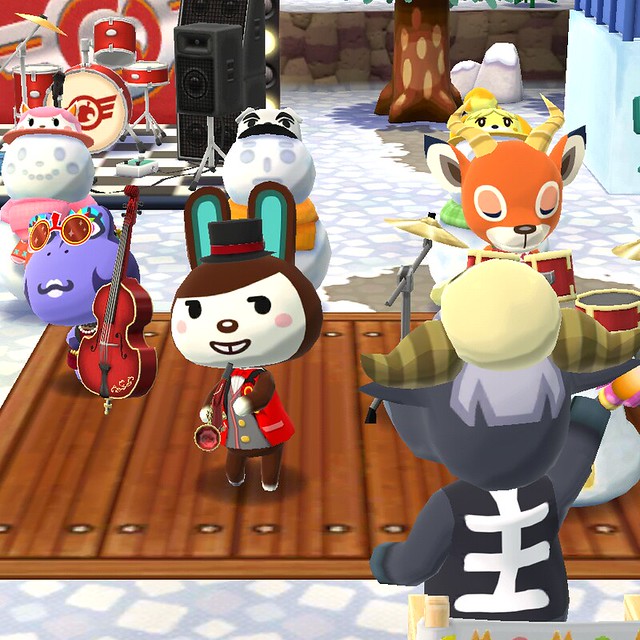 Adding an upright bass and some smokin’ hot saxophone licks to the main stage has brought a whole new feel to Mayor Gluxie’s music festival campsite!

Everything was great… until the snowmen started acting strangely. This past week was the fishing part of the event, and some strange luminescent crystals have been discovered in great number. Then the big daddy Perfect Snowman suddenly started moving!

Mayor Gluxie discovered that the snowmen had summoned a giant floating crystal! That’s… weird… Then without warning, several crystals began to pop up across the main stage! And even more surprisingly… some of the other snowmen decided that they wanted to take the stage and be the rock stars! 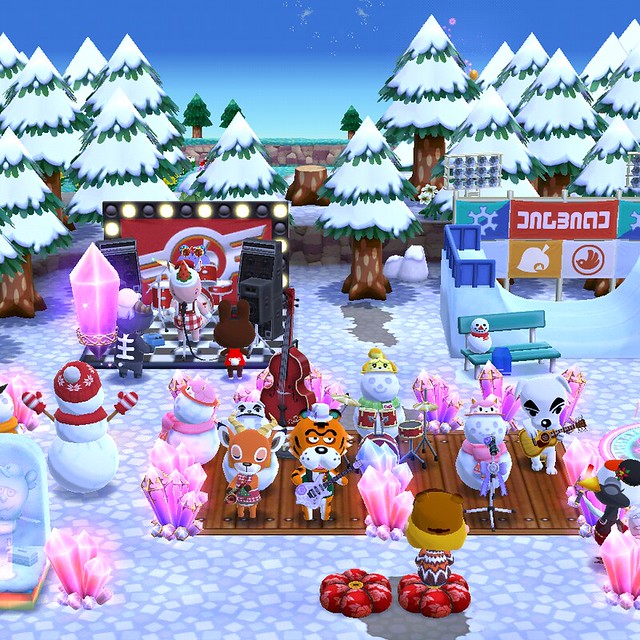 It’s not like the snowmen were up to any mischief, so the other animals decided to just make room for them and pretended to act normal. Now the main stage is quite crowded, and the Reese snowman at the microphone is too shy to sing. The Isabelle snowman realized that it doesn’t know how to play drums… so the performance is a little ‘off’ for the time being…

Mayor Gluxie is ready for the snow to melt and get her campsite back from this awkward snowman crystal takeover!! Does anyone know when the seasons will change in game? 😜