With birthdays come presents, and so on Friday when I (and thousands of others) received the Amazon Treasure Truck alert for Nintendo Labo pick-up in NYC and a friend suggested this be her gift to me… I decided to go pick one up!

I’ve never purchased anything through Treasure Truck before, so I was interested to see how it would work. My pickup location was near a Whole Foods, so I walked over to the store and found the truck stationed around the corner. There was only a short line – I don’t know if that’s because I got there on the early side, or if the demand is low for this game, but I was relieved that this wasn’t going to take too long. A table was set up for people to enter to win a free Nintendo Switch, and other workers were scanning our Treasure Truck QR codes and handing out the huge Nintendo Labo boxes.

The Nintendo Labo Variety Kit is a collection of “Toy Con” construction sets, as well as a Nintendo Switch game to guide you through the assembly and facilitate the cool game features that the Toy Con unlock. While the game is certainly geared towards kids, an adult is most likely required during the Make phase, which can get a little complicated! I’ve only made the RC Car Toy Con so far, check it out! 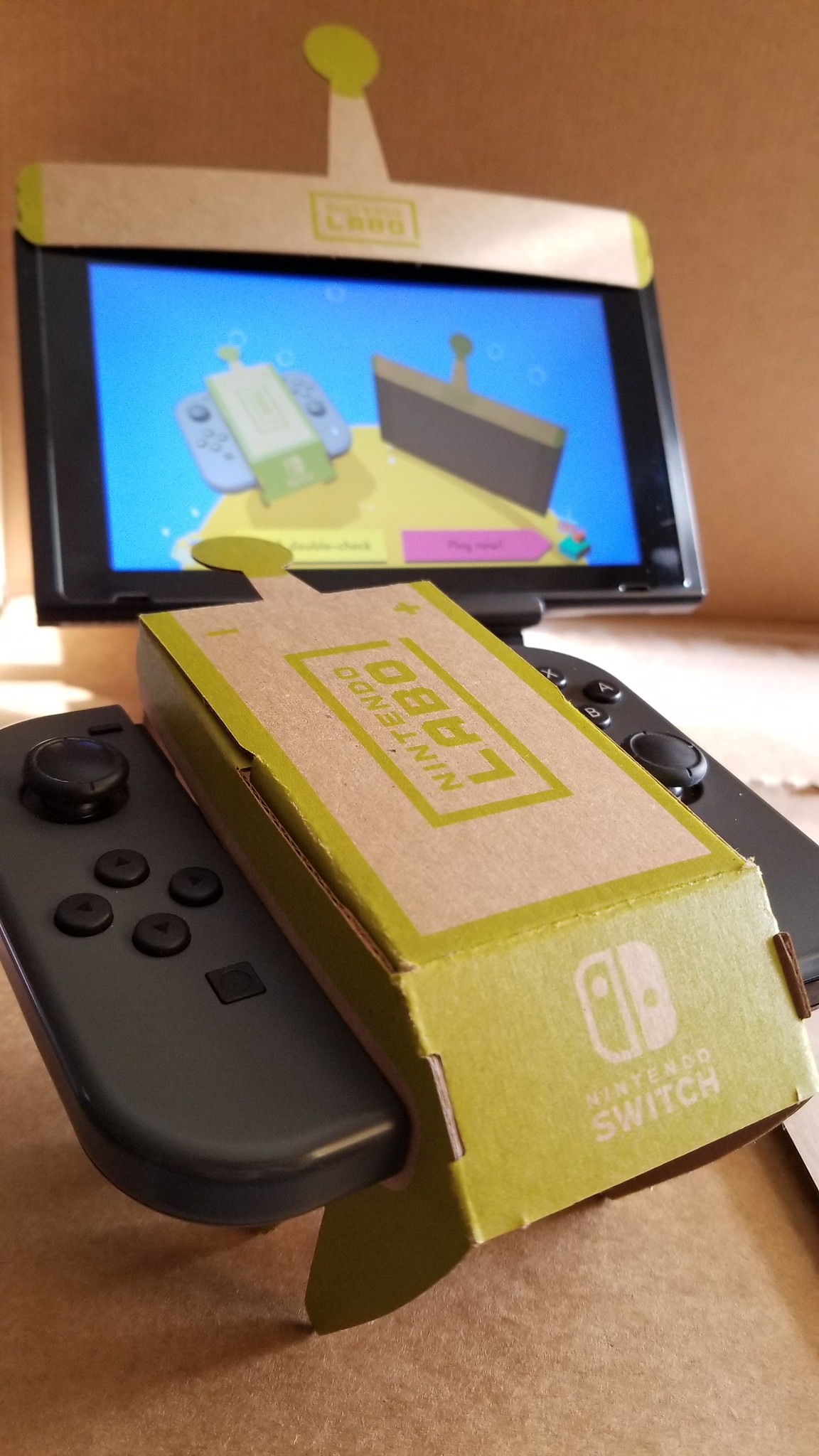 The RC car has no wheels, and is powered by the Joy Con inserted into the side, causing vibration down the legs of the RC car, propelling it forward. (It only works on hard surfaces, and my room is carpeted so I just used the Labo box.)

The RC Car set comes with a cardboard car to follow along with in the instructions, a matching ‘antenna’ to stick on the Switch console, as well as a few extra add-ons and stickers! It also comes with a second cardboard RC car that you can build if you have a second set of Joy Con to use with it. Right now I only have the gray set, but I’m going to get a colored Joy Con set with a birthday gift card. (SIDE BAR: I really can’t decide which color Joy Con set to get! Red and Blue, or Neon Yellow and Pink?? They are both really cool! I wish there was an Orange and Blue option… Leave me a comment on which set I should get tho!!)

You probably wanna see the RC car in action. It’s actually pretty loud. I made a quick video for you to see that this actually works. In the video you can see that I use the Switch console as a controller and press buttons on the screen to make the RC car move – and I can control the left and the right independently if I choose. That’s cool and all, but a little bland, right? 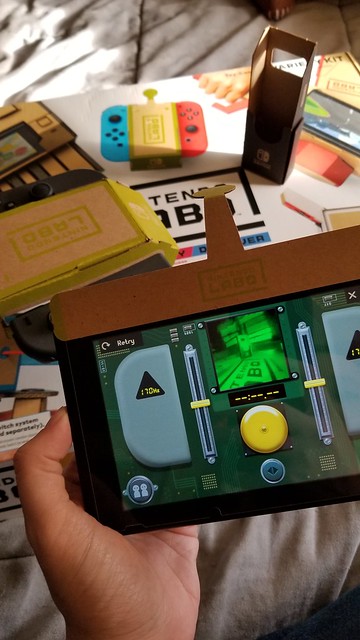 When you complete the initial construction and play through the mechanics, you are taken to the next phase of the Nintendo Labo game, the Discover phase. In this separate section of the game, you can explore some additional features of the new Toy Con you just built, and see some suggested new ways to play. When it comes to this RC Car that I made, did you realize that since the Joy Con utilize built-in IR technology that this RC car also has a fully functional ‘night-vision’ camera?? I didn’t, until I was checking through this Discover section! I used it in the day time but in my photo here you can clearly see the camera POV of my RC Car as it sits on top of the Nintendo Labo box.

There are other hidden features in the RC car, such as the ability to auto-navigate via use of reflective tape. There is also a ‘two player’ mode for people who have a second set of Joy Con. You can build that second RC Car that I mentioned and set up RC Sumo Matches! Or try racing them! Or come up with something else… I had fun freaking out my cat with my RC Car!! lol

OK so now you have your RC Car, and maybe a friend to RC Sumo with, but you still need to add a little SOMETHING to make this more fun? Nintendo Labo also provides a few extras to customize your RC Car. There is a Plow attachment, an Elephant head attachment, and a Sunglasses attachment. The Discover section also shows ideas on how to use paints, markers, and all sorts of materials to really customize the RC car and make it special. As a bullet journal enthusiast, I have plenty of washi tape and stickers on hand. Here is my final RC Car Masterpiece:

What do you think of my RC Car? If anyone else has this game and wants to race or sumo wrestle their car, hit me up!! lol

Since Nintendo Labo is so hands-on and mysterious to everyone, I’ll continue to document my construction of Toy Con projects for future blog entries. Unless you totally think this is over-sharing and want me to stop, let me know in the comments about that too hahaha!!

In closing, Happy Earth Day! And Carney‘s Birthday! Plus it’s Nature Day in Animal Crossing Pocket Camp! (Not to mention there’s ANOTHER new feature coming soon in ACPC! I’ll blog about it when it’s released!! Yayyyyy!)